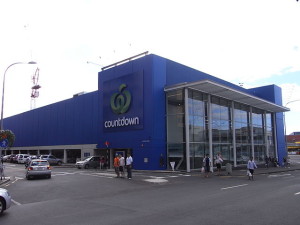 A couple of years ago I was in New Zealand for Christmas, and my girlfriend and I were shopping in a grocery store called Countdown. We had just checked out with our groceries, when we saw members of the Salvation Army singing. Like many others in the store, we stopped to enjoy the music.

Tip from Terence: Because New Zealand is in the southern hemisphere, its seasons are the exact opposite of the United States. Even though I was there during the Christmas season, the weather was around 80 degrees! While people in the United States may think of snowflakes and Santa Claus for Christmas, New Zealanders think of beaches and barbecue.

A gentleman stood next to me. His clothing and demeanor looked rough, but he was smiling and enjoying the music along with the rest of the crowd. I looked at him and smiled. He looked at me and smiled… Then he PUNCHED me in the throat!

Normally, I have good reflexes and should have been able to prevent this! However, not only was I holding two full bags of groceries, but who expects to be punched while listening to the Salvation Army sing at a grocery store?

All I could do was look at him and say, “Why did you do that?”

I then heard my girlfriend yell from the front of the store, “LET’S GO!!!!”

I walked away. About two minutes later the rage caught up with me and I was furious! What on earth just happened? Who assaults someone while listening to Christmas music?

While we were walking home my girlfriend was berating me. She told me that I should have known there was no way to reason with that man, because it clearly looked like something was wrong with him.

She was right, but my mind was racing too much to think about her words. All I could think about was what might have happened had I not walked away. I’ve had three years of Taekwondo training, and every scenario that went through my head ended up with me at a police station!

I got home and began to forgive the man. “Lord, please forgive this man for punching me in the throat! Forgive him, bless him, and release him!” Years ago I learned that forgiveness is a choice and that it should be done as quickly as possible. You don’t necessarily forgive someone for their benefit, but because it removes poisonous anger from your spirit. And because forgiveness is a choice, it can be done whether or not you are at fault. You can’t be sure of why everything happens to you in life, but you can respond in a way that does not keep you in bondage to bad experiences.

After fifteen or so minutes I was calm again.

Looking back, I’m glad that I walked away, because any other response would have been bad for everyone involved! I don’t know what was wrong with that man, but I hope he was able to get the help that he needed.

Remember, just because it looks like everyone is having a good time, doesn’t mean that you shouldn’t pay attention. There are both good and “questionable” people all over this world. You just have to be able to discern who is who. Happy travels, and be sure to stay vigilant even if you are listening to the Nutcracker Suite!