Have you ever had someone who you didn’t know tell you EXACTLY what was wrong with you? I have! Sometimes you can’t avoid The Law of the Garbage Truck. 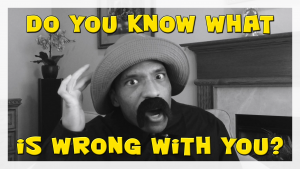 Have you ever had someone who you didn’t know tell you EXACTLY what was wrong with you?

It was a Sunday morning in January, and Tonya and I were enjoying the beautiful Auckland weather. It was 70 degrees, a cool breeze was blowing, and I was with a gorgeous lady.

After about 40 minutes of leisurely walking around, we decided to return home to eat breakfast. The sun was shining and birds were chirping…

And then I met Papa New Guinea Guy.

As we were walking, we passed a rough looking gentleman who was waiting at a bus stop. He looked at us and waved us over. Wanting to be friendly, we walked to him and had this conversation:

Papa New Guinea Guy: “Where are you from?”

Tonya: “Are you from Papa New Guinea?”

Tip from Terence: Tonya assumed he was from Papa New Guinea because of his look. Many of the people from that country have a very unique look, and she made an educated guess. Not all forms of profiling have to be negative.

At this point, I’m expecting to have a pleasant conversation. PNG Guy, however, had another idea:

Papa New Guinea Guy: “Do you know what’s wrong with the black man in America?”

Papa New Guinea Guy: “The black man in America is not clever!”

I had to admit, if I weren’t so offended, I might have been impressed! To have my gender, race, and nationality insulted within 10 seconds of meeting you… That takes skill!

Papa New Guinea Guy: “We see you on TV being killed by the police. In my country, if that happens, we chop ’em up and put ’em in the toilet. You are not clever!”

What do you say to someone who tells you what is wrong with YOU?

Yes, the United States is not perfect, and there are very unfair things happening. But when did this guy become an expert on international affairs?

He went on for about 30 more seconds, and then Tonya said:

And she walked off.

Why didn’t I think of that?

As we were walking away, the man continued to talk as if he didn’t care whether or not we were part of the conversation.

We went back to the apartment. I wasn’t exactly upset, but I wasn’t happy either. I did a forgiveness exercise, got the negative energy off of my spirit, and we sat down to eat breakfast and discuss what happened.

It turns out that Tonya had seen this guy a number of times. My guess is that he wanted to say something to her before, but that he didn’t think it was appropriate for him to talk to an American female who was alone.

However, with me there, all bets were off!

This guy had been waiting for a perfect opportunity to let someone know his opinions on the United States, and he could not wait to unload.

After discussing the situation with Tonya, I was reminded of a philosophy that Joel Osteen described called The Law of the Garbage Truck.

The Law of the Garbage Truck basically says that some people are like garbage trucks and go around all day collecting trash. Eventually, they will want to dump their trash, and they just might dump it on you!

Can you prevent everyone from dumping their trash on you? Probably not.

But you can keep your lid on tight!

PNG guy had his big bag of trash and was waiting for a United States trash can to walk by.

And I happened to be that guy!

After I had forgiven him, I had to laugh at the reverse of the situation. What if I had done the same to him?

Me: “Excuse me, sir? Are you from Papa New Guinea?”

Me: “Great! Do you know what’s wrong with your country?!”

I can’t think of a better way to Lose Friends and Alienate People.

You don’t have to engage in any conversation in which you are being abused. Sometime it is better to just walk away quickly.

Incidentally, a couple of weeks later we were at a gas station and a Kiwi taxi driver pulled up to us and introduced himself. He knew we were American and was clearly happy to see us. We discussed some of his travels in the United States, and we ended the conversation by exchanging websites. He even encouraged me to give him a call if I ever wanted to play tennis.

After we parted ways, I told Tonya that interacting with this guy was the exact opposite of the Papa New Guinea guy.

You never know who you’ll meet while traveling. But, no matter what happens, keep your lid on tight!