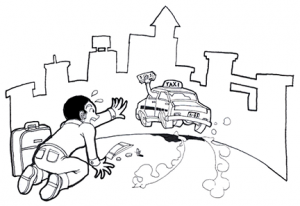 If you are traveling internationally, one of the first things that you’ll want to do when you arrive at your destination is relax. Traveling can take a lot out of you, and this is especially true when going to another country. However, before you get to your destination, you’ll have to leave the airport.

Nothing beats having someone who already knows the area meet you at the airport. Even if someone can’t meet you there, you should have a number of transportation options to choose from. Bus, train, subway, taxi, or renting a car being the most common (rickshaw being less common). However, before you choose a transportation method, you should ask someone else the best way to get to where you are going. The person you ask could be a friend, staff that works at the hotel in which you will be staying, or someone working at the information desk in the airport. The key is to ask someone who doesn’t have a hidden agenda, and who wants you to have as pleasant of an experience as possible.

Before I first arrived in Korea, I had booked a hotel that was near the airport that had free shuttle service from the airport to the hotel. I booked the hotel before I left the United States. I was informed that all I had to do was have someone from one of the airport information desks call the hotel, tell the hotel staff that I needed to be picked up, and the hotel would send a shuttle for me. After arriving at Incheon International Airport in Seoul, I got my bags, went through customs, and left the baggage claim area. I found an information kiosk, had one of the airport staff call the hotel that I had booked, and was picked up by the hotel’s shuttle bus.

Tip from Terence: I am not a fan of going places and booking hotels when I get there. I have been burned by this before, and it is definitely not my preferred method of travel. Of course, there are times in which this is not possible, so you may have to travel on a wing and a prayer and just show up to a city and see what is available. Some people like doing this and think it is adventurous! I salute those brave souls. But as for me and my lady? We don’t do that.

I arrived in Korea a few hours before my girlfriend. Before leaving the United States, I had told her that I would meet her at the airport so we could go back to the hotel together. After showering at the hotel and resting for a couple of hours, I returned to the airport to pick up my girlfriend, Tonya. After I met her outside of the baggage claim, we set about getting transportation to the hotel.

This is where the taxi trouble started.

A guy was walking around the terminal, approached us, and asked us in English if we needed a taxi. I told him, “No thanks,” and continued to walk to the kiosk where we could call our hotel’s shuttle from. However, my girlfriend stopped to talk to the man.

Tip from Terence: If there is a guy standing outside of the arrival gates asking if you need a taxi, this is the exact guy you need to avoid. In fact, out of all of the options you have for getting where you want to go, this is the last one you want to take!

I pulled my lady aside:

Me: “Let’s go get the hotel shuttle.”

Tonya: “I’m tired. Let’s just go with this guy who is right here.”

Me: “The hotel shuttle will be quick. And it is free!”

Tonya: “But this guy is right here. And I am tired!”

For some reason Tonya thought that having this random dude take us to our hotel would be a good idea! I told her that we should have the hotel shuttle pick us up, but she insisted that she wanted to take the taxi, because she thought it would be quicker. I didn’t want to argue, so I reluctantly agreed.

We told the taxi driver that we’d let him take us to our hotel. He then happily helped us load Tonya’s bags into his taxi, confirmed our hotel’s address, and we began driving to our hotel.

The taxi driver was pleasant, but something didn’t seem right. He kept mentioning “airport fees” and I started to get nervous. It reminded me of being with a mechanic who keeps talking about all the things that need to be done to my car. The longer he talks, the higher the bill is going to be. Either the taxi meter started with too high a fare, or it was the driver’s continual mentioning of various “fees,” but I got the feeling that the driver thought the letters S-U-C-K-E-R-S were printed on our foreheads.

Because I had chosen a hotel near the airport, the drive was not very long. When we arrived at the hotel, the taxi driver stopped the car and said we owed 50,000 won, which was about $50 USD.

We were in the taxi for 15 minutes at best, and there was no way that our ride should have cost that much money. The taxi driver and I began to argue about the fare. My girlfriend and I owed him something, but there was no way I was going to pay $50 for a 15 minute cab ride!

After a minute of arguing in English, I told the man to hold on. I left my girlfriend in the taxi and I went into the hotel to get the concierge. I explained that I needed help with my taxi driver, and he came out to talk to the driver. The concierge was also surprised at the price of the ride, and began to negotiate in Korean on my behalf.

After negotiating, the hotel concierge was able to get the fare reduced by 30%. While I wasn’t happy with the outcome, it was better than paying the full gouging price that was first suggested. I paid the driver, and Tonya and I went into the hotel.

Before traveling, do as much research about where you are going as you can. When it comes to transportation, it is especially useful if you can find out the best ways to go places before you get to your destination. This will help you avoid people who want to prey on your wallet.

If you do find yourself being taken advantage of, and you can’t speak the local language enough to argue, get someone who can to help you. But whatever you do, if someone walks up to you in the airport and says, “Need a taxi?” just say, “No!”